On October 10th, 2020 North Korea unveiled its most advanced tank design yet. The tank, which we will call the M2020, is quite advanced for a few reasons. All of North Korea's tanks before this design lacked several key features of a modern Western tank. North Korea has addressed some of these issues in the M2020. Thermal imagers, an APS and composite armor or ERA appear to be used on the M2020.

The M2020, while fairly modern for a few key reasons, is still built based on the T-62. This is apparent from the sight to the right of the main gun on the turret. However, this tank is equipped with a 125mm gun and has seven road wheels instead of the T-62's five. 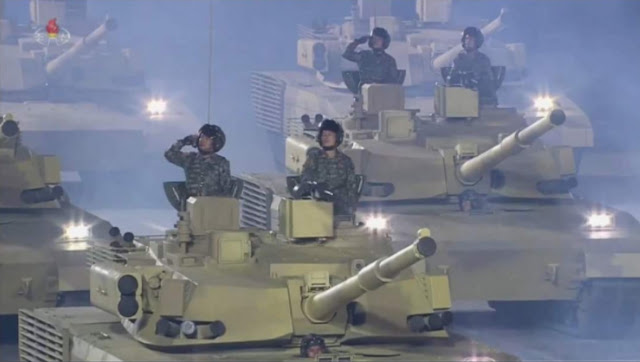 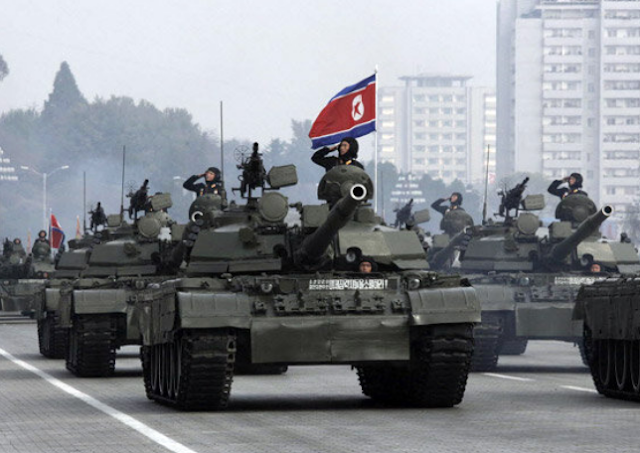 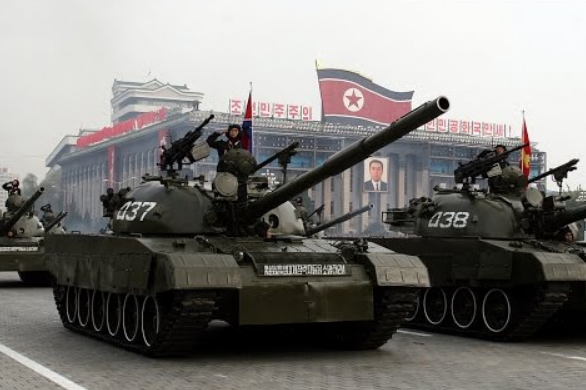 The M2020 appears to have two separate imagers, one for the fire control system/gunner and one apparently for the commander. 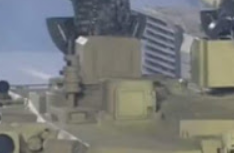 The tank's second most modern feature is an apparent hard kill Active Protection System (APS.) There are six APS projectile launchers built into each side of the turret. This appears to copy the Russian T-14 Armata APS, at least cosmetically. These are definitely not smoke dischargers, as those are visible on top rear of the turret, four on each side. 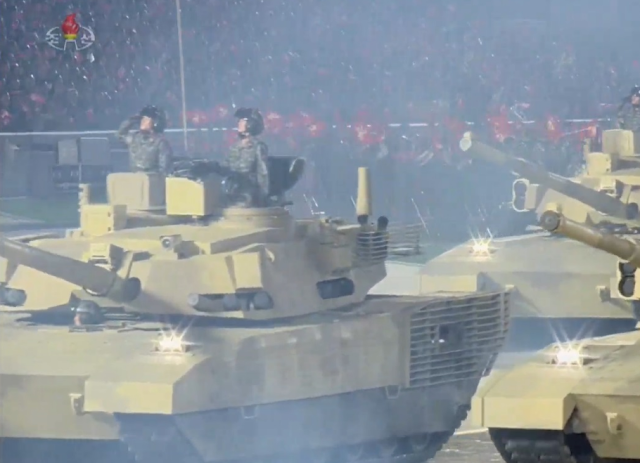 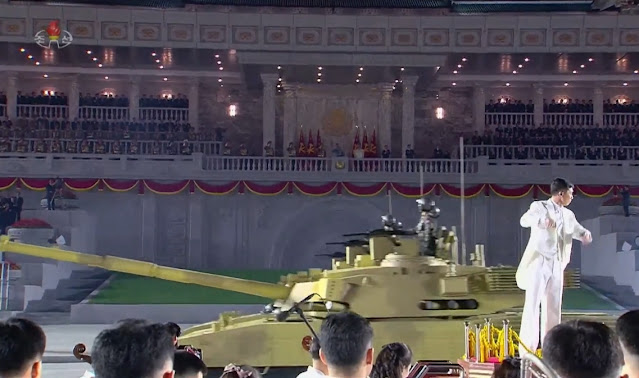 The APS projectile launchers. What may be radars are visible above the launchers.

Previous NK tanks have featured ATGMs on the top of the turret. The M2020 has more integrated ATGMs built into the right side of the tank's turret. These ATGMs are likely NK's copy of the Soviet Fagot, the Bulsae-2. The profile of the tank looks much like the Russian T-14 Armata. The sideskirts and slat armor appear to cosmetically resemble the Russian tank, however the M2020 appears to lack explosive reactive armor sideskirts that the T-14 Armata employs. Another new feature that is similar to the T-14 is that there are now seven road wheels instead of the previous models' six. 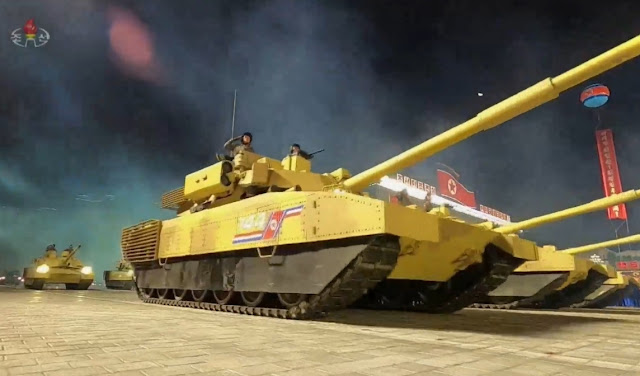 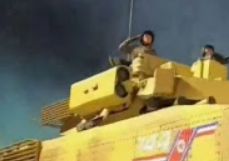 Previous tanks had ATGMs somewhat crudely mounted on the turret roof along with MANPADS and a dual automatic grenade launcher. Also note the six roadwheels, like the T-72 and the T-90. 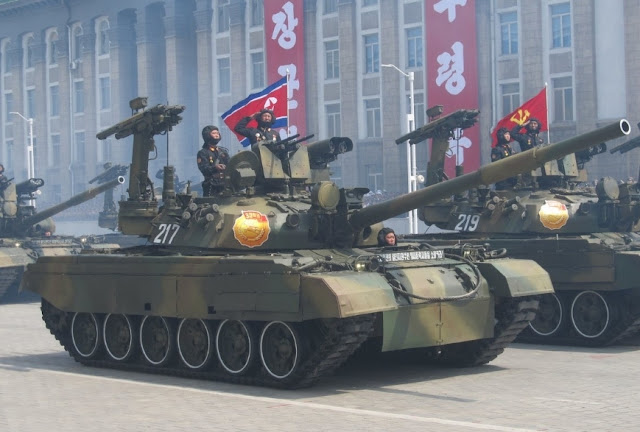 From the front, the M2020 bears a strike similarity to the American M1 Abrams. It has a similar sloped armor layout on the turret and front hull. The M2020 appears to have ERA (Explosive Reactive Armor) or possibly some sort of composite armor on the Glacis plate. It is unknown how effective this would be against ATGMs or kinetic tank shells. 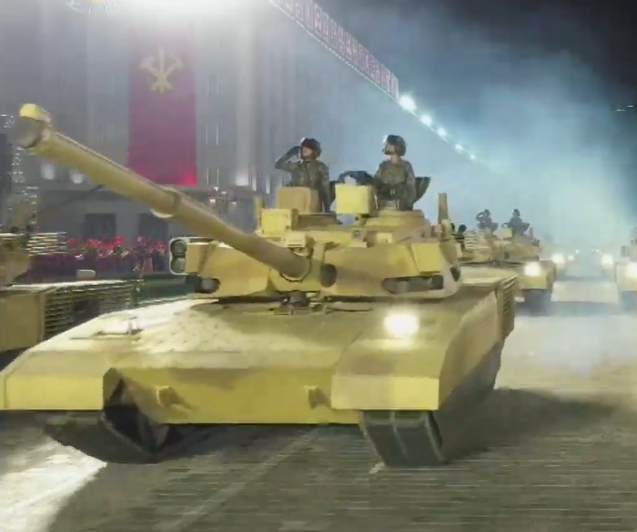 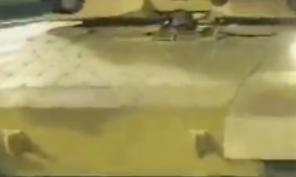 The rear of the M2020 is protected by slat armor, much like the T-14 Armata design. 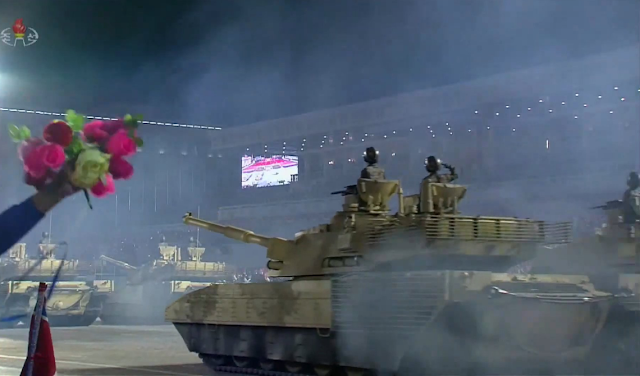 Finally, much like previous tank models, North Korea chose to put an automatic grenade launcher on the turret instead of a heavy machine gun. 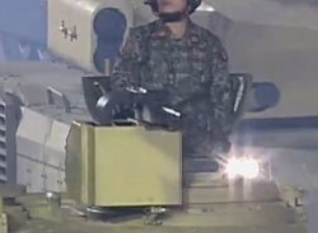 The M2020 is a major leap forward in tank design for North Korea. Its armor protection is better, its 125mm gun is fairly capable, but most of all the APS and thermal imagers give the tank an edge. With the thermal imager, the M2020 stands a chance a spotting an enemy tank first and accurately firing on it with the fire control system. It is also now resistant to ATGM and anti-tank rocket attack if in fact the APS is operational and not just for show. North Korea is not one to show fake weapon systems, so it is quite possible the APS is actually functional. This tank is still not as advanced as its South Korean counterparts, like the K2 Black Panther, but it is a step in the right direction for the North Korean tank fleet. For a country that still has WWII T-34 tanks in service, this is a major leap forward.