The Khan Sheikhoun chemical attack occurred on April 4th, 2017. Khan Sheikhoun is small town in the Northern Syrian province of Idlib. The chemical agent, allegedly Sarin gas, was said to have been dropped by a Syrian Air Force Su-22 jet. However, little investigation took place into who was truly responsible, or even what the chemical agent really was. The attack was immediately blamed on the Syrian Government, with mere anecdotes from pro-rebel activists being taken at face value by the media.

Many of the sources of information on the chemical attack seized on by the media and pro-opposition analysts are quite questionable. Almost all of these sources can be proven to have had connections to the Syrian al-Qaeda franchise, Jabhat al-Nusra. Jabhat al-Nusra has changed its name twice in attempts to rebrand itself and is now known as Hayat Tahrir al-Sham. Even the town of Khan Sheikhoun itself can be proven to be under the control of HTS/al-Qaeda.

HTS/AQ released this photo on March 25th, 2017 from Khan Sheikhoun. The photo shows a Russian airstrike on HTS positions inside the town. This proves that al-Qaeda had a presence in Khan Sheikhoun just days before the chemical attack occurred. 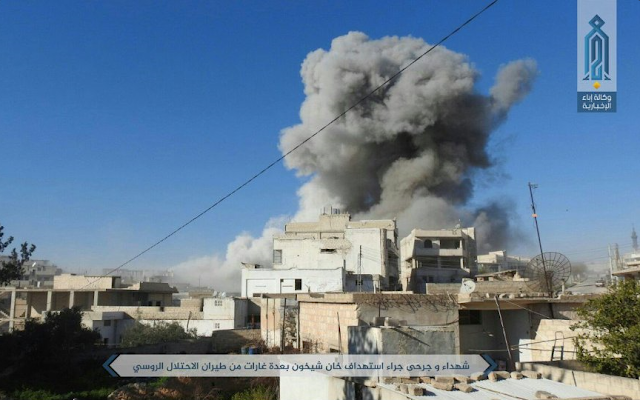 One questionable source of information on the chemical attack comes from rebel media man Moaz al-Shami. Shami has become quite famous in pro-rebel circles, and has covered many battles during the Syrian Civil War. He is seen in the photo below at what was claimed to have been a hospital hit by an airstrike in Khan Sheikhoun just after the chemical attack occurred. It is worth noting that the dust mask he is wearing would not be effective against Sarin gas. 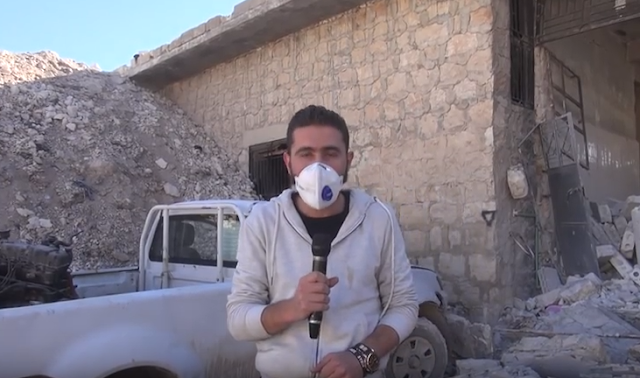 Shami has appeared alongside al-Qaeda covering their battles all over Northern Syria, from Idlib to Latakia and Aleppo.

Shami seen alongside a BMP-1 with a Jabhat al-Nusra/Syrian al-Qaeda flag during the battle of Mallah, Aleppo in July of 2016. 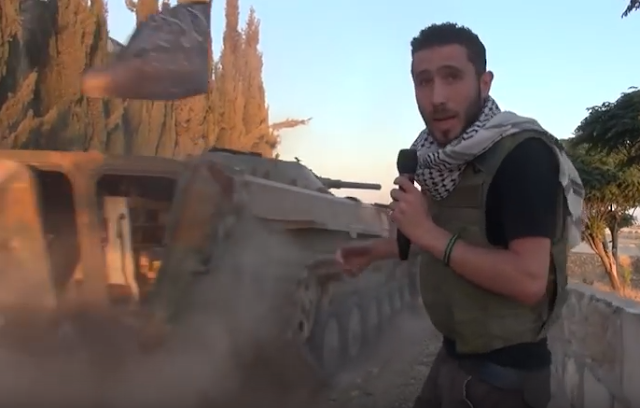 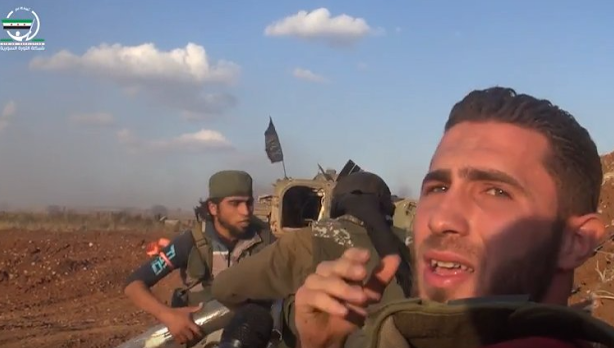 Another rebel media personality who reported on the Sarin attack was Hadi Abdallah. Abdallah is probably the most famous rebel media man, so of course he was quickly on the scene of the attack in Khan Sheikhoun.

Hadi Abdallah standing near the bomb crater where the Sarin attack allegedly took place. He is wearing a dust mask that would be ineffective against Sarin. 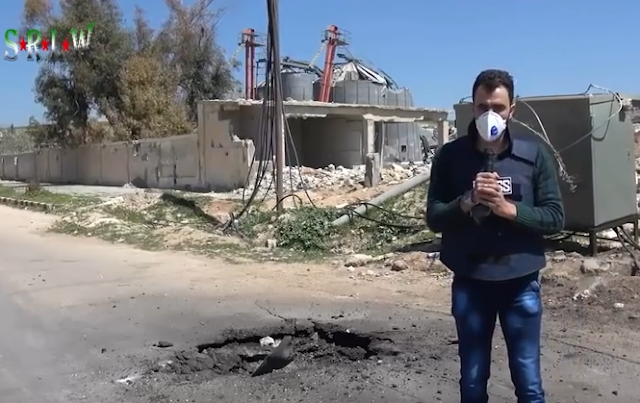 Hadi Abdallah has appeared alongside al-Qaeda covering their advances on the battlefield, and has interviewed al-Qaeda officials such as Abu Mohammad al-Jolani and Abdallah Muhaysini. 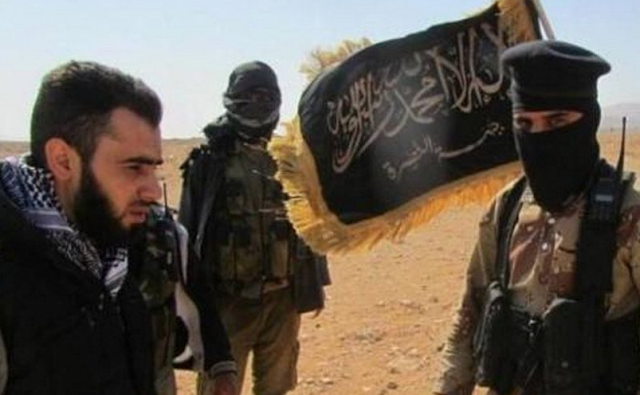 He is seen here next to Abdallah Muhaysini, a designated al-Qaeda terrorist. 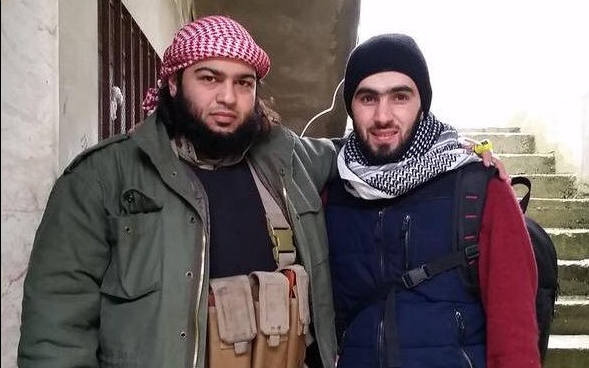 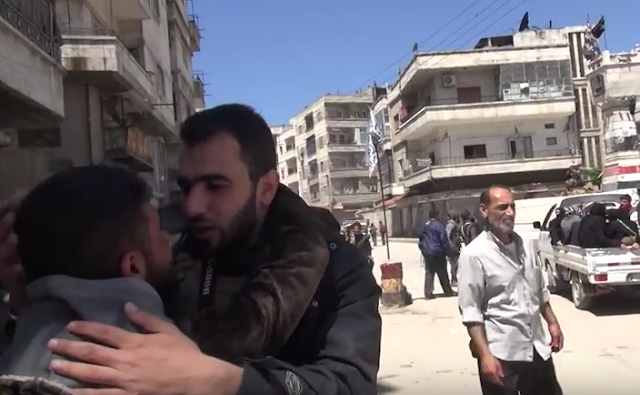 Abdallah with al-Qaeda fighters in Ariha, May 2015. 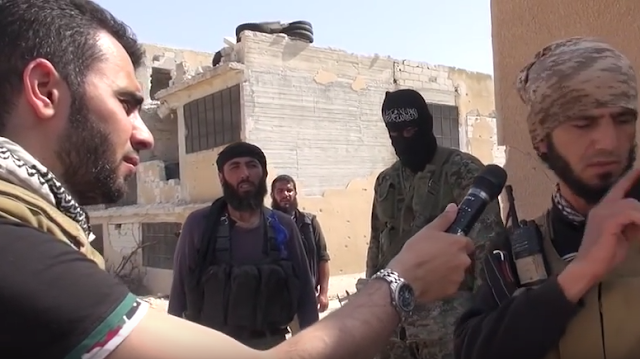 Abdallah with al-Qaeda fighters after they captured the Mastuma Camp in March 2015. 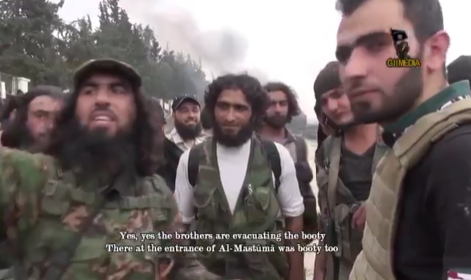 The Syrian Civil Defense, whose members are known as "White Helmets" were present at the scene of the attack. The white helmets are lauded as rescuers with no political or ideological affiliations whatsoever. This is not completely true, the white helmets have been seen alongside many rebel factions, including extremist ones.

White Helmets treating Khan Sheikhoun victims. Note that they are not wearing gloves, and would therefore have been exposed to Sarin. Sarin is skin permeable, and contact with victims should have resulted in these White Helmets being poisoned as well. 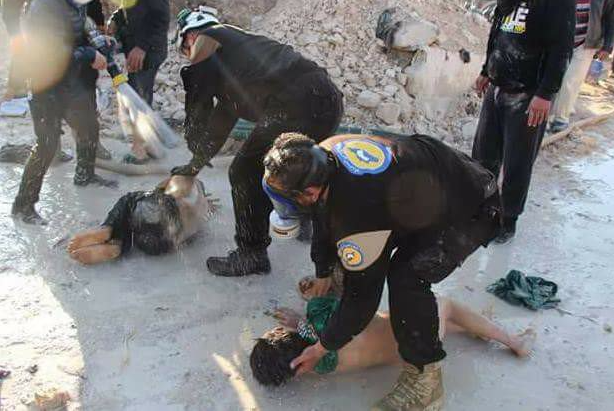 White Helmets are not neutral, and they are not always saving people. Here they are seen celebrating alongside Jabhat al-Nusra (Syrian al-Qaeda) after Idlib city was captured in 2015. One White Helmet is twirling with al-Qaeda's flag. 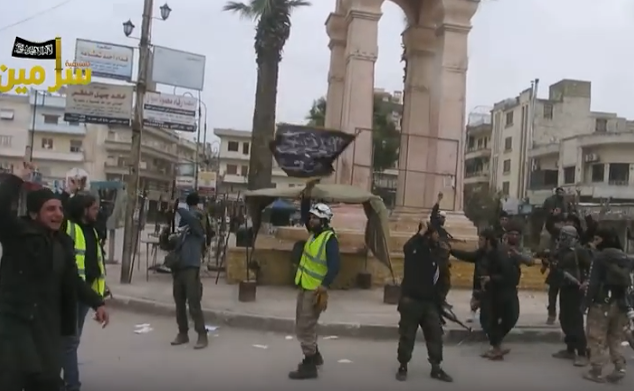 Another example of this behavior after Jabhat al-Nusra captured Ariha city in 2015. al-Qaeda's flag is seen on the flagpole. 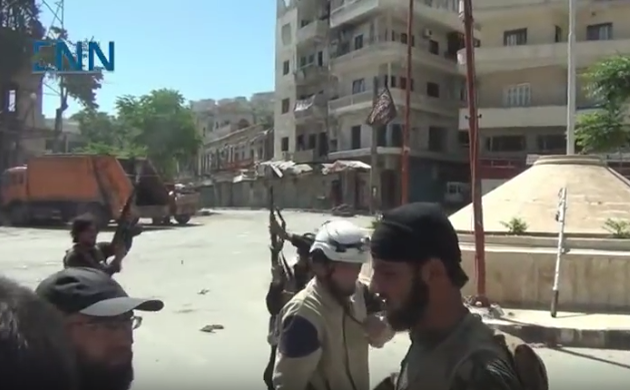 Dr. Shajul Islam is the doctor who received victims of the alleged Sarin attack at a hospital in the town of Binnish. Dr. Islam has claimed chemical attacks many times before, but only with this Sarin attack did he receive the attention he wanted.

Dr. Shajul Islam at a hospital in Binnish receiving patients of the alleged Sarin attack. 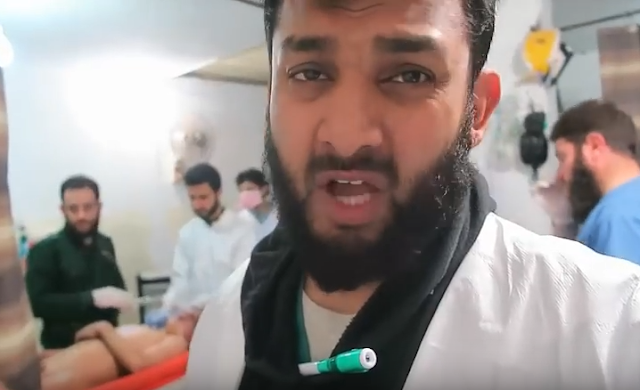 Dr. Shajul Islam has quite an interesting past. In 2012 he was charged with the kidnapping of two journalists, Joeroen oerlemans and John Cantlie. Shajul Islam was accused of being an ISIS member and of being directly involved in kidnapping the pair of journalists. However, the case fell apart as the Journalists were unable to testify. John Cantlie went on to be a prominent ISIS hostage, forced to narrate ISIS media videos all over Iraq and Syria. 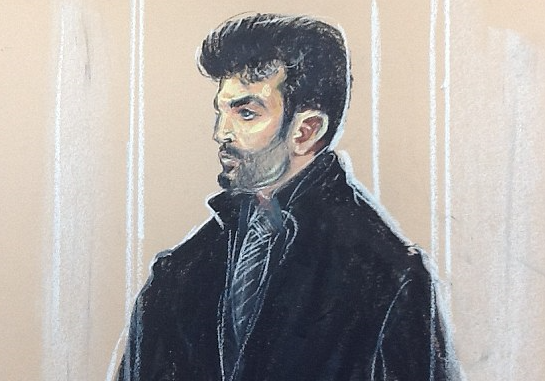 It is also important to note that Binnish, where the alleged Sarin victims were taken for treatment, is a known al-Qaeda stronghold. Photos below are from a Jabhat al-Nusra/al-Qaeda demonstration in the town in February of 2016. 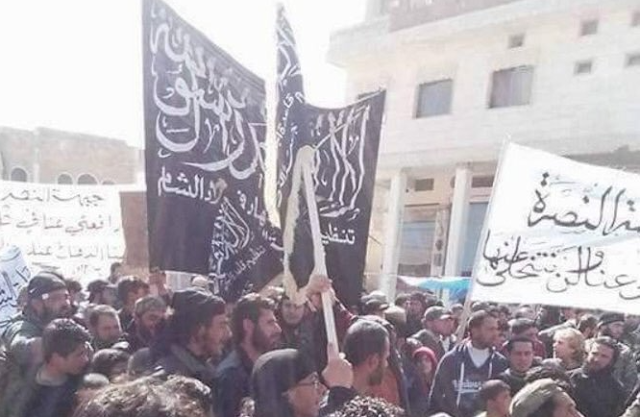 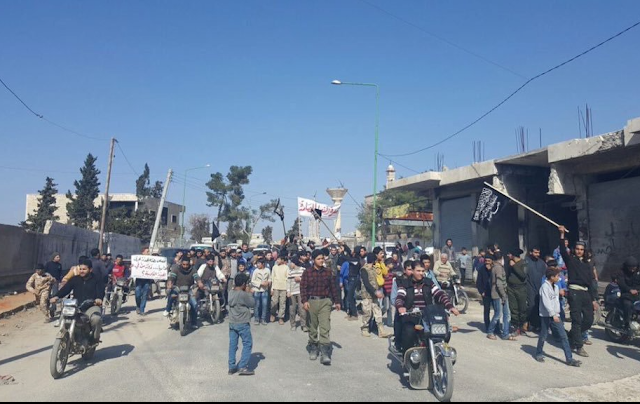 An important fact about Hospitals throughout Idlib, and almost certainly including the hospital in Binnish, is that al-Qaeda has access to them as proven by their own media. Jabhat al-Nusra released these photos from a hospital through their al-Manara al-Bayda media network in 2016. 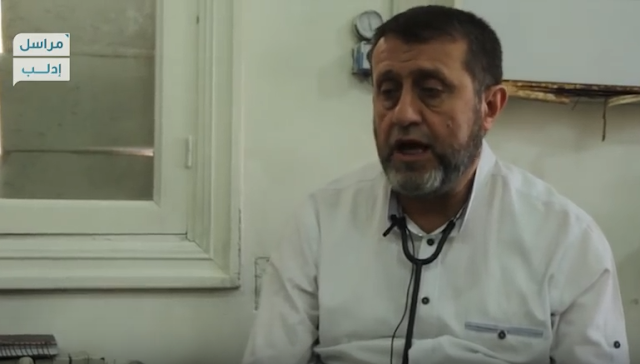 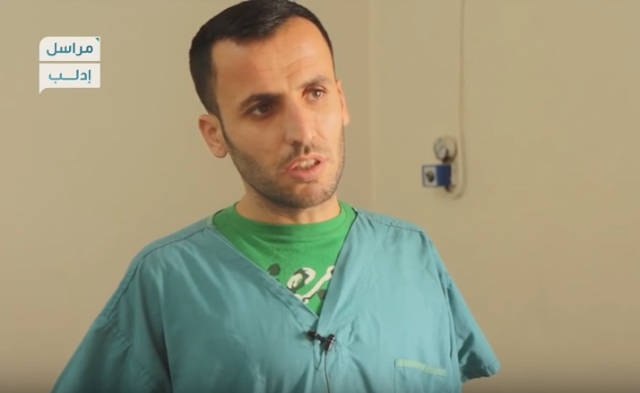 Even an alleged victim of the Khan Sheikhoun Sarin attack has been shown to have links to al-Qaeda. Abdul Hamid Yousef was broadcast all over the media holding what he claimed were his dead baby daughters, killed by the Sarin attack. Despite his sympathetic appearance, his Facebook profile shows a dark side to him.

The image of Yousef that the media spread after the attack, holding what he claimed were his dead daughters. 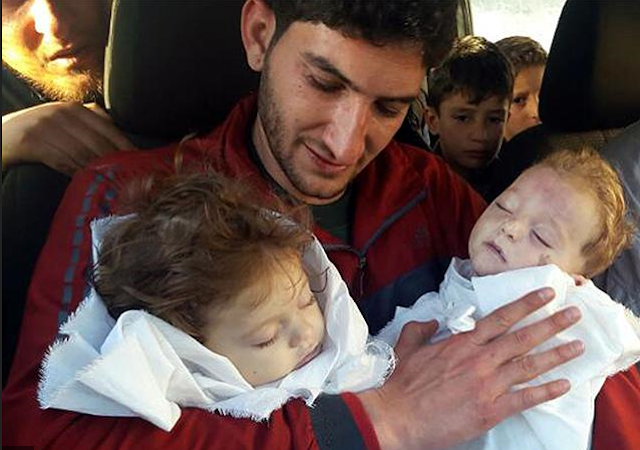 Yousef's Facebook profile shows that he is a rebel fighter. Based on what he had written, it is safe to assume he is an extremist. 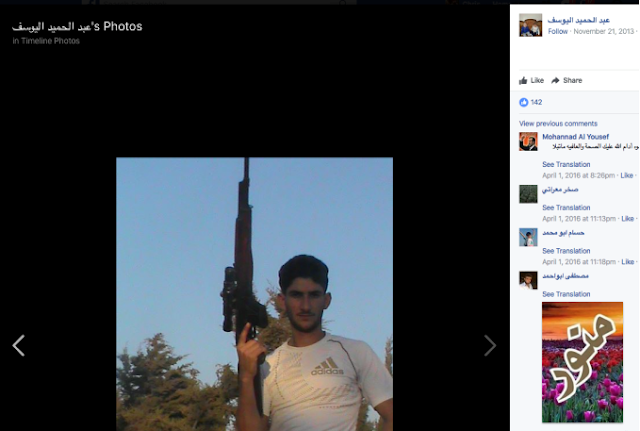 Here he wishes for victory over the "enemies of Islam," and wishes to "humiliate the pagans." He is seen on rebel technicals mounted with a ZPU-2 and a ZU-23-2. 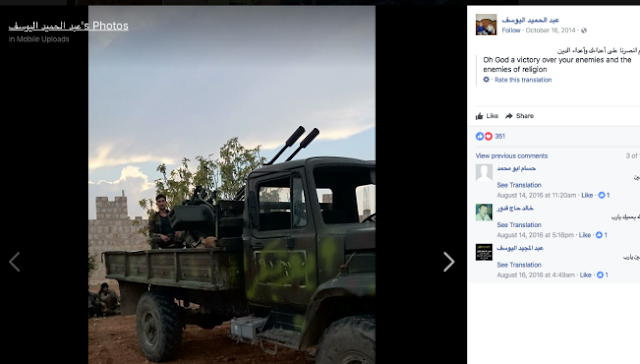 Hayat Tahrir al-Sham/rebranded al-Qaeda released a new image from Khan Sheikhoun on June 25th, 2017. The photo is sheer propaganda, showing children playing happily. The important thing about this image is that it shows al-Qaeda is still in control of Khan Shiekhoun. The UN and the OPCW were never even able to visit the site of the alleged Sarin attack for this reason. 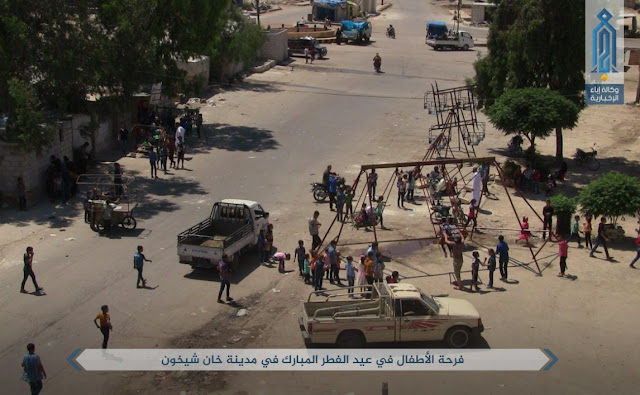